ojasalert
Breaking News, News Report, Yojna
The Central Government has extended the nationwide lock down due to the global epidemic till May 17. The lock-down is having a huge impact on the India economy. The Reserve Bank is considering extending the ban on loan repayments by banks by three months 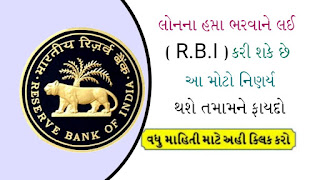 The RBI may take a big decision
The Central Bank has allowed them to repay bank loan installments for three month to curb the Koro epidemic and help those affected by the lock-down. The exemption was granted till May 31. According to sources, the government has now extended the lock-down till May 17. It is believed that the repayment period in the payment of loan installments should still be extended. Suggestions have been made in this regard from many sectors, including the Banks Association of India
✔️ Important Links
Mitro Amari Aa Website Ma Modi Sarkar Yojna, Gujarat Sarkar Yojna, New Upcoming Yojna, Free Yojna, Sarkari Sahay, Government Skim, Government Notification, Gujarat Khedut Yojna, News Yojna 2020, Yojna2020, Government Jobs,Results,Syllabus,General Knowledge, Cmo yojna etc..