ojasalert
News Report
How To create 3D photo In Facebook

The new tool will allow users to use this technology on any mobile and convert 2D image to 3D image in real time.

No photography skills or other lenses are required
This technology can be used on any mobile device
The system will be unveiled in August at the Annual Conference on Computer Graphics SIGGRAPH 2020
Named the Photo Feature, the technology has been available on Facebook since the end of 2018, but required a dual lens camera. 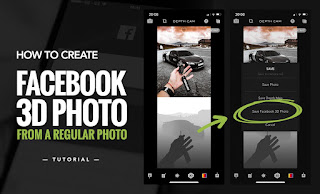 Researchers at Facebook have developed an end-to-end system. This will allow the user to convert a 2D image taken from his smartphone into a 3D image. This new framework gives users a more practical approach to 3D photography and also offers suggestions for new designs.

With this new tool from Facebook, users will be able to use this technology on any mobile and convert 2D image to 3D image in real time. No photography skills or other lenses are required. The tool takes only a matter of seconds to convert a 2D to 3D image. This tool converts 2D old and new images into 3D.

This system works on any phone
“Initially all images were black and white and granular, then color photography and then digital photography gave us images with high quality and good resolutions,” said Johannes Coffe, president and researcher of the team that developed the tool.
Now the era of 3D photography has started, in which images can be made to feel more vivid and real. Named the Photo Feature, the technology has been available on Facebook since the end of 2018, but required a dual-lens camera.

Now the Facebook team has added a new algorithm to it, which automatically estimates the depth of 2D. This technology can be used on any mobile device.
Facebook enlisted the help of AI to create this tool 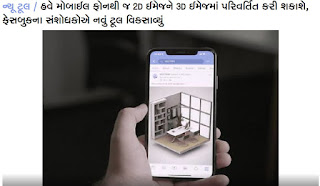 To create the new tool, the researchers trained through the millions of 3D images available in the public domain. For this, Facebook enlisted the help of AI (Artificial Intelligence). The framework also incorporates textual inputs and geometry capture of 2D input images into 3D conversion, allowing them to take vivid images.

Each type of automated step that allows the user to convert a 2D image from mobile to 3D is optimized to support Mac and other models. It is capable of working with the memory and data transfer capabilities of the device.

Facebook is developing a system that can detect high quality depth
Facebook researchers are developing a system for a high-quality 3D experience that will accelerate computer vision, graphics and machine learning.
For the future, the team is exploring machine learning methods that can convert not only photos but also videos into 3D. The system is set to be unveiled by the company Computer Graphics at the annual conference SIGGRAPH 2020 in August.

How To create a 3D photo:
Tap What’s on your mind? at the top of your News Feed. Tap Write something… in a group or on a Page.
Scroll down and tap 3D Photo.
Select the photo you’d like to use.
Tap Share or Post.