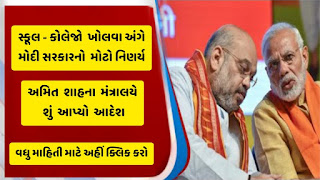 However, the Modi government has decided to close educational institutions across the country. The order issued by the Union Home Ministry clearly states that schools, colleges, education, training and coaching institutes across the country will remain closed. The central government has also clarified that the opening of schools, colleges, education, training and coaching institutes will be considered in the second phase and this consideration will take place in July. This means that educational institutions, including schools and colleges, will not open during the month of June
The Home Ministry order also clarified that the school, college, education, training and coaching institute would be opened only on the advice of the state governments. The state government will also take a decision in consultation with the parents of the children and those associated with the organizations. It is clear that schools and colleges will not be open for the entire month of June as the decision to reopen these institutions may be taken after receiving all the relevant feedback
☑️ Important link