ojasalert
News Report
An Official announcement is yet to be made that schools in Gujarat will not open till Diwali, but sources in Gandhinagar said that this was considered in today’s meeting. An announcement will be made shortly. 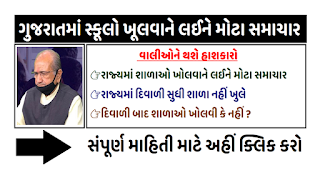 A meeting has been held in Gandhinagar
A meeting of the Educational Union Coordinating Committee was held at GCERT. A meeting was held under the chairmanship of Education Minister Bhupendrasinh Chudasama in which various issues of teachers were discussed and the issue of cutting school grants was also discussed. The issue of recruitment of non-academic staff will also be resolved. In addition, there will be a re-meeting regarding the reduction of the study. An official announcement will be made shortly.