Google has given Paytm a big tweak. Under which two Paytm apps have been removed from Google Play Store. Paytm is accused of violating Google’s policy. Google says it will not promote the online casino and gambling app on its platform at any cost. 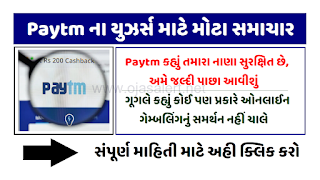 In the case of the removal of Paytm, Google said it would not support the gambling app in any way. Paytm and UPI App One97 Communication Ltd. Developed by This app is not found when searching on Google Play Store. However, the app already installed in Android will work. Just can’t download new app. In addition to Paytm Payment App, other apps of the company like Paytm for business, Paytm money, Paytm mall etc. are available on Google Play Store.

“We do not allow online casinos,” Suzanne Frey, Google’s vice president of product, Android security and privacy, wrote on the blog. Nor do they support any app that facilitates gambling. If an app takes users to an outside website, giving them permission to participate in a paid tournament to win real money or cash prizes, it is a violation of our policy.

In this case, Paytm tweeted and sent a message to its customers that currently downloading or updating Paytm app from Google Play Store is not available temporarily. And he will be back soon. All your money is secure, and you can usually use your Paytm app.