The long-running struggle of teachers has come to an end today. The biggest news for state teachers has come across. Teachers‘ grade pay has been revised after agitation and presentation on 4200 grade pay issue. Deputy Chief Minister Nitin Patel made the announcement at a press conference. 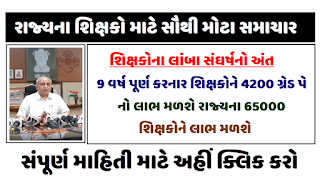 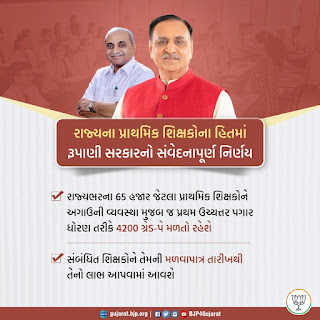 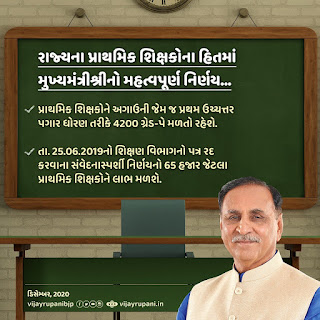 Primary teachers came to the Satyagraha camp to protest against the demands including grade pay, but the protest did not take place as the police did not allow them to do so. Police detained about 50 teachers from different places. The grade pay received by primary teachers over the years was abruptly reduced from Rs 4,200 to Rs 2,800. In addition, the state education department has ordered teachers recruited after the year 2010 to get the benefit of low grade pens. The teachers intensified the protest program through social media. After that, a meeting was held with the Deputy Chief Minister of the Teachers Union, Nitin Patel, in which the questions of the teachers were resolved.

65 thousand teachers of the state will benefit
More than 1 lakh 90 thousand teachers under the Gujarat Education Department conduct primary education and all these teachers make millions of students study in the primary school. Which is represented by two unions of the state. In which Gujarat State Primary Teachers Union and Second Federation of Primary Education Gujarat State both these unions had discussions with Education Minister Bhupendrasinh Chudasama and Vibhavari Ben Dave as per the need of teachers’ questions. The government then discussed the chairmanship of the Chief Minister. Accordingly, after completing the administrative process today, the state government has decided to cancel the resolution which was postponed from 16-07-2020. So the question of giving a salary standard of Rs. 4200 to the teachers has been solved properly. Teachers who used to have a salary scale of Rs 2,800 will now be given a grade pay of Rs 4,200. Now the cancellation of this circular will benefit 65 thousand teachers in the state.

No more exams for promotion: DyCM
In addition, DyCM said that now there is no need to take any exam for promotion. Consulted with the Department of Finance, Education and General Administration. There were frequent representations in the 4200 grade pay case. Education unions made representations to the CM. The questions raised by the 2019 resolution have been resolved. Importantly, this will benefit primary school teachers.