Amid ongoing agitation by farmers over agricultural laws, the Union Cabinet met in Delhi today under the chairmanship of Prime Minister Narendra Modi. After the meeting, Union Ministers Prakash Javadekar, Ravi Shankar Prasad and Santosh Gangwar briefed about the decisions taken at the cabinet meeting. 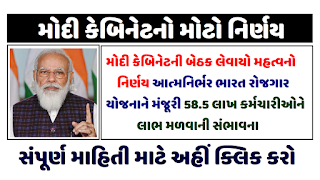 The Union Cabinet on Wednesday approved the promotion of employment in the formal sector and the promotion of new employment opportunities in the Covid Recovery Phase under the Self-Reliant India Package-3. Union Minister Santosh Gangway informed in a press conference that the self-reliant India Employment Scheme will be implemented in the country, under which an amount of Rs 1584 crore has been sanctioned for the financial year and a total expenditure of Rs 22,810 crore for the entire scheme period 2020-2023. About 58.5 lakh employees will benefit.

58.5 lakh employees are expected to benefit
According to an official statement, an estimated 58.5 lakh employees are expected to benefit from the scheme period. Under which the Center will provide subsidy for 2 years to all new employees involved till October 1, 2020 or thereafter till June 30, 2021. In employing organizations which have 1000 employees, the Central Government will contribute 12 per cent to the total EPF for 2 years, including 12 per cent employee contribution and 12 per cent other allowances.

Even if the salary is less than 15 thousand, you will get the benefit
From March 2020 to next year, the employing organizations have 1000 employees, the central government will contribute 12% for 2 years. If an employee has a monthly salary of less than Rs. The plan will be eligible.

Any IPF member who has a Universal Account Number and whose monthly salary is less than Rs 15,000 and if he quit his job between March and September this year during the Corona epidemic and has not found employment in any of the IPF’s employment providers till September Suitable for taking advantage of the scheme.

USOF plan approved
According to Union Minister Santosh Ganguly, when the Modi government came to power, there were 60 million jobs in the organized sector, which has now increased to 100 million. Apart from this, the Union Cabinet has approved the USOF scheme in two districts of Arunachal Pradesh, Assam. During the cabinet briefing, when the ministers were asked to change the peasant movement and change the agricultural law, his reply was that the government was working for reconciliation with the farmers.

Prime Minister’s Wi-Fi access interface to be launched in the country, 1 crore centers get green light to open
According to Union Minister Ravi Shankar Prasad, the government will open 10 million data centers in the country. The scheme is named Prime Minister’s Wi-Fi Access Interface, which will revolutionize the Wi-Fi in the country. Under this, the government will open a public data office (PDO), for which no license will be required. Any existing store will be turned into a data office. The government will be allowed to open centers for data office, data aggregator, application system in 7 days. Union Minister Ravi Shankar Prasad said fiber connectivity would also be added to the islands of Lakshadweep. Connectivity will be delivered from Kochi to 11 islands of Lakshadweep in 1000 days.