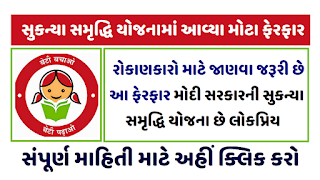 ⧭ Interest rate does not change on account default
According to the scheme, it is necessary to deposit Rs. 250 every year. If it is not credited, it will be considered a default account. The account cannot be reactivated under the new rule. Sukanya Samrudhi Yojana earns 7.6 per cent interest. The interest rate at the post office is 4% for a savings account.

⧭ Account can be closed ahead of time
According to the new rules of the scheme, in case of death of the daughter, permission has been given to close the Sukanya Samrudhi Yojana prematurely. In the old rule the account could be closed in 2 positions. One is the death of the daughter and the other is the change of address.

⧭ Rule of account operation
Under the new rules, she will not be allowed to operate the account until her daughter turns 18. Under the old rule it was allowed for this in 10 years. Now the account holder will be able to operate it only after 18 years. Documents have to be submitted to the bank or post office at the age of 18 at this time.

These documents will be required to open a new account
Account opening form in Sukanya Samrudhi Yojana
Child’s birth certificate
Depositor’s Identity Card such as PAN Card, Ration Card, Driving License, Light Bill, Phone Bill etc.
Net banking can be used to deposit rupee
Passbook will be given at the time of account opening