Teachers will take promotion mandatory, forced to be forced to the primary school of the state and the recruitment of the recruitment of the year after year -2010, the last teachers came to the price of 4,200 grade payments from the time to 4,200 grade payments. If they are not willing, the state government could demand 4,200 grade penny of teachers. But now the gadget has declared the solution to the new rule. Now we have to take a mandatory promotion. In any place of the district with the rules for the implementation of this time where the extended notification of principal will be issued. So now there will be a duty to be forced, the benefit of 4,200 grade payments will be received as head teacher promoted by teachers. 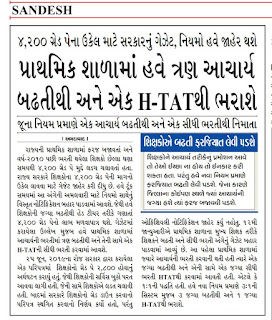 Gazette did not declare the official notification. According to the 12th, now in the primary school in January, the recruitment of Acharya’s recruitment as the main teacher of the primary school in January and promoted a teacher against him and directly from H – Tat. Have been provided. At the first time, when the primary school was done by the government on June 25, 2019, when the principal recruitment was done by a circular, one circular was interpreted by a space promotion and a space in front of it. So the teachers’ service books were returned from the recruited Htat. That is to come to come. Against the teachers were the method of fighting 1: 1. Now the new rule was 3: 1. Later, the government decided to postpone 3 space promotion and circular of 1 space according to the system’s grade-down system, but H – Tat will be filled from