WhatsApp, the world’s most widely used instant messaging application, has updated its privacy policy. This privacy policy will come into effect from February 8. Many users are unhappy with WhatsApp’s new policy, which has led users to look for an alternative to WhatsApp.

People are now switching to the Privacy Focused Instant Messaging application Signal. Now this app has become a top free app in many countries including India. 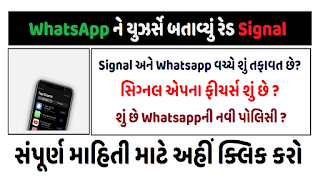 Download erupted after Elon Musk tweeted
Elon Musk, CEO of Tesla and the richest man in the world, has advised his followers to use the Signals app by tweeting. Musk’s tweet has caused a stir on social media. This tweet has been liked by more than 2.7 lakh people and retweeted by more than 32 thousand people.

What is the difference between Signal and Whatsapp?
The Signal app does not collect user data in any way while Whatsapp has now started collecting user data. The Signal app only takes users’ mobile numbers, while WhatsApp collects all data, phone numbers, contact list, location, messages.

What are the features of Signal app?

Chat back up
Chat backups in Signal app like Whatsapp are not possible on third party app which means once you lose your phone you will not be able to backup your chats from iCloud or Google Drive. However the app saves the encrypted chat in the phone itself. Only users will have access to it. The app is so secure that it does not even save your contact details on its server.

Incognito keyboard
The Signal app has an extreme level of privacy feature called ‘Incognito Keyboard’. Leading messaging platform does not have such a feature. This feature prevents the app from following your keyboard typing. The app’s screen security feature will prevent other apps from seeing the signal in the app’s window to see what you’re typing.

✅Important Links :
👉News Report : Click Here
👉Signal Apps : Click Here
What is Whatsapp’s new policy?
The new policy states that the company may use, reproduce, distribute and display the content you upload, submit, store, send and receive from Whatsapp anywhere to operate our services. This policy is going to be implemented from February 8, 2021. After this date new conditions will be required if the user rejects it his account will be deleted. For that you can visit the help center. Currently, the policy offers the option of agri and not now.
Join WhatsApp Group Join Now
Join Telegram Chennel Join Now
← Previous Post
Next Post →